Misinformation in the time of COVID-19 - A review of three recent infodemic themed webinars. 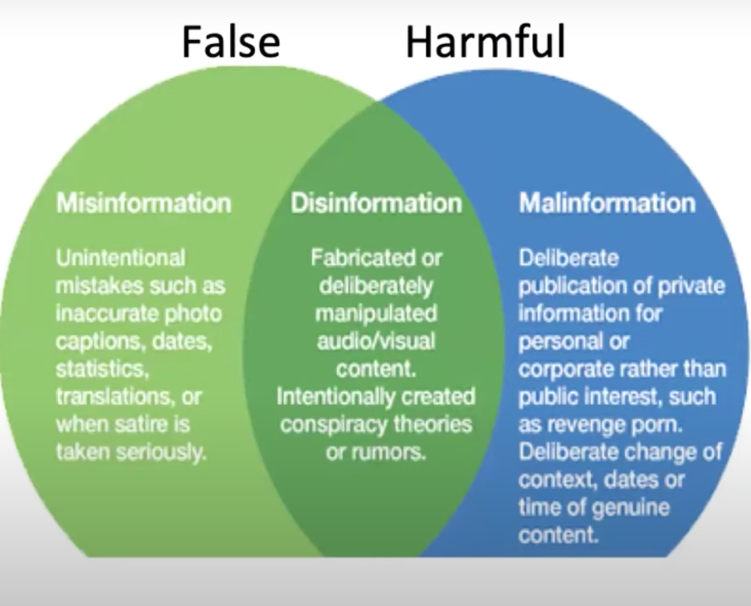 There is no doubt that the Coronavirus has led to an explosion of new words and phrases and this new vocabulary, in many ways helps us make sense of the world we now inhabit. Among the plethora of new terms, Infodemic, is increasingly being used in relation to the rise in COVID-19 related mis and disinformation.

The first of these webinars was hosted by the International Federation of Library Associations (IFLA) and held on 8thof May followed by European Distance and E-Learning Network, (EDEN) on 11th May and most recently UNESCO’s Media and Information Literacy group (MILCLICKS) on 20thMay.

‘Knowing the right news in the digital age’ was moderated by Dr Shantanu Ganguly and had four distinguished panellists.

Dr Ganguly set the ball rolling with the following definition of Infodemic: An early 21st century blend of information and epidemic. A surfeit of information about a problem being detriment to its solution. He compared the spread of fake news to that of the spread of a virus and taking India as an example, a recent study found that over 64% of Indians encountered online misinformation, the highest among the 22 countries surveyed. India had highest number of social media users with 300m on Facebook , 200m on Whatsapp, 250m on YouTube. Tik Tok user numbers stand in excess of 88m and are steadily rising.

IFLA board member, Dr Sanjay Bihani addressed the issues of information literacy and misinformation and looked at the response to the current infodemic from librarians. Many libraries have set up regularly updated, fact-checked information. They provide resources such as the recently adapted How to Spot Fake News (COVID-19 edition) and other measures that empower users to be information literate. His key takeaway focused on the personal responsibility to fact check information before sharing and pointed to the wide range of resources on the IFLA website.

Professor Michael Seadle of Humboldt University Berlin spoke about misinformation with special reference to the current situation in Germany where COVID related misinformation is taking its toll. Misinformation and information, he said, needs to be viewed on a greyscale gradient from all black (a complete lie) to all white (everything true), with many, grey stages in between where judgment is complex. He stated that the international press is one of the biggest sources of misinformation, and gave the example of recent reports about the malaria drug Chloroquine being a possible treatment for COVID-19. Yes, these claims were backed up by medical papers but they were taken completely out of context leaving this type of information in the grey area of the scale.

Social media, he said, is hard to control, people will spread rumours about simple solutions and cures that are not cures. Additionally, right wing propaganda have been using social media to spread lies, especially about foreigners and in particular, those coming from China. On a positive note, he believes the German government is generally trusted and truthful and people are working with the government to combat the spread of COVID. Germany has one of the lowest death rates in Europe, partly because they reacted early. He concluded his presentation with the call for libraries, as an important source of information, to be digitally active.

Dr P N Vasanti is the Director General of the Centre for Media Studies and is a specialist in policy issues in broadcasting and media consumption patterns. She spoke about the proliferation of misinformation and disinformation on social media which has accompanied the pandemic. In this period of fear and uncertainty, fabrications and misinformation can flourish and grow. Vasanti, shared an infographic distinguishing between misinformation, disinformation and malinformation.

She went on to discuss the findings of her recent study into the modality of fake news, stating that users perceived the content of a story as more credible when it was in video format compared to audio and text and were more likely to share the fake news with family members. Seeing is believing and in general, memes, images and videos are more hazardous than audio or text. She concluded her presentation with the message that the problem is not just a technical one, the challenge is to address the problem by looking at it as a social and behavioural issue and librarians play an important part in this ecosystem.

Finally, Prof Gurujit Singh, Professor, Faculty of Law, IP University discussed the legal aspects of misinformation. He began by quoting the Director General of the World Health Organisation “ We are not just fighting an epidemic we are fighting an infodemic. Fake news spreads faster and more easily than this virus and is just as dangerous”

Fake news can have far reaching implications from, undermining democracy, social unrest, breach of peace to election influencing, sedition and defamation. Technical measures to counteract fake news can help counteract its growth however, the continuous evolution and growing sophistication of technology such as deep fakes is a challenge. Regulatory measures, he said, are being used to control fake news, he listed, censorship, identification and prosecution, penalty and the localisation of data. Other positive initiatives such as WhatsApp’s launch of their Coronavirus Information hub is an appreciable move. The biggest challenge from a legal perspective he believes, is to define fake news and misinformation, and to consider if the spread is deliberate or unintentional.

This IFLA webinar was attended by in excess of 2,700 viewers across 31 countries and can be viewed here

How to manage the onslaught of information and fake news? The 2019-nCoV infodemic.

The webinar was moderated by Antonella Poce associate professor in the department of education at the University of Rome. She was joined by Princeton Research Director, Irvin Katz, and a PhD student at Roma Tre University in Rome.

Katz emphasised that Digital Literacy includes a full range of skills not just evaluation, it is certainly related to technology but it is also cognitive and not exclusively about technology. Digital literacy, he says, should be thought of holistically and not as a separate sets of skills. 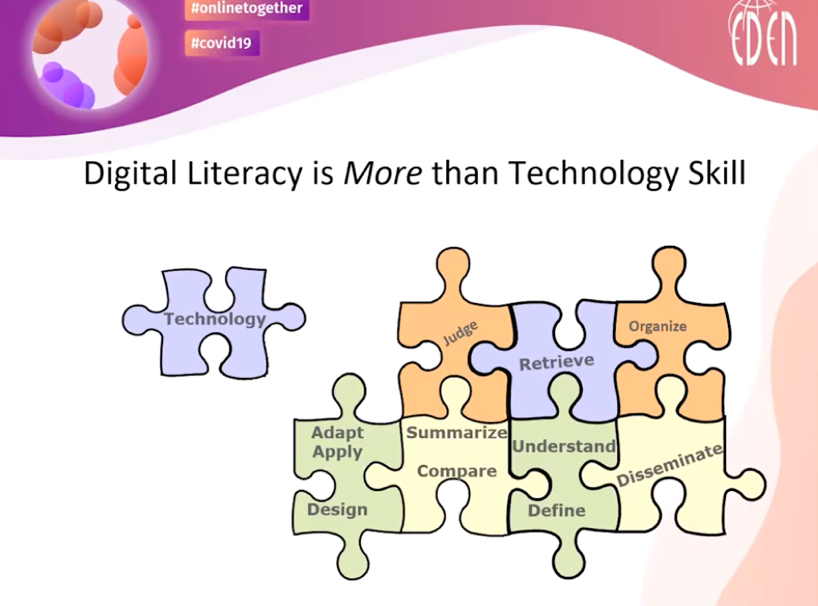 The last point he makes is about communication, people, he said are not just consumers but are also producers of information. They not only need to know how to create TikToks, Tweets, webpages etc but they must be cognizant of the most appropriate mediums to communicate a message.

Francesca Amendui’s presentation began by asking what is an infodemic and what ‘antibodies’ are available to fight it. She considers the best antiboides to be critical thinking and digital literacy and looks at some innovative methods on how to assess student’s CT and DL skills. She discussed WHO’s response to infodemic: Despite the efforts of WHO and social media platforms, she argues that hundreds of thousands of people have consumed unreliable content about the coronavirus, the phenomenon is so huge that epidemiologists are starting to find ways to measure the impact of communication dynamics on an epidemic to help forecast the spread of the virus. She went on to discuss some of the latest research currently being undertaken into the infodemic. Critical thinking and digital literacy are crucial factors in the fight against misinformation and she suggests some practical activities to assess learner’s skills in a collaborative virtual environment.

The presentation concluded with a quote from Tobelli : 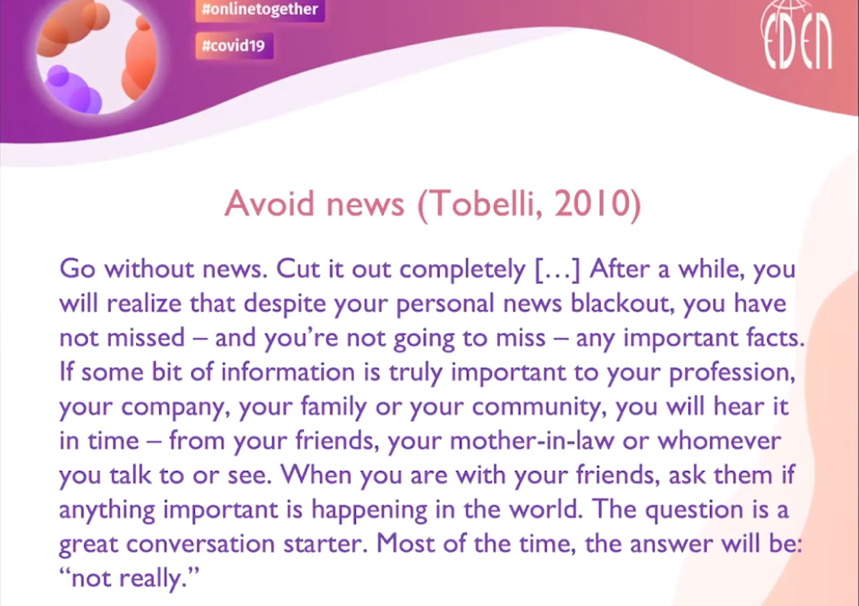 Cases on youth engagement to address the COVID-19 disinformation.

Three youth & education expert speakers, gave us their insights on how best to engage young people in this crisis and in the new world going forward. Eva Reina, Director of the European Youth Information and Counselling Agency, Mohammed Foboi & Beatrice Bonami, GAPMIL Youth Ambassadors for Africa and Latin America and the Caribbean

Beatrice a young GAPMIL ambassador, who has been working on youth engagement projects in Latin America since she was 8 years old she believes that young people are not just followers but can be fierce leaders, they are the ‘engines of the world’. She believes that the hope and sheer energy of young people can make a difference in the fight against disinformation.

Mohammad also a youth ambassador, spoke passionately about the outbreak in his native Liberia in early March. His network collaborated with the government and national stakeholders to launch the COVID-19 Community Action Plan. They collated resources from reliable sources such as the World Health Organisation , they trained young people and in turn they acted as messengers. They also created community radio broadcasts to communicate with the youth of West Africa.

Eva summarised of some of the strategies and activities taking place in Europe to engage young people. She notes that mental health and psychological support was mostly in demand. In Scotland young people participated in live Q&As on YouTube with the first minister, they also worked with social media influencers to communicate messages on how to stay safe. Elsewhere in Europe many tools were employed including TikTok, YouTube, and youth orientated webinars. In Malta a social media campaign ran for young people to share their day to day experience of the pandemic. By educating young people on misinformation they can become role-models and engage in peer to peer learning.

Every region faces challenges in youth engagement during this crisis, one of those challenges highlighted was the lack of ‘youth friendly’ information. Additionally, the pressure caused by the crisis has impacted on youth engagement in general and circumstances of being isolated, illness, and lack of peer interaction has affected the motivation and mental health of young people.

Outreach and bridging the intergenerational gap is key to youth engagement and empowerment.

UNESCO MILCLICKS offers Media and Information Literacy training and resources for both educators and young people and are available on their website. [link]

Isabelle Courtney is a Librarian/Information professional, lecturer, and freelance journalist with a strong background in research and commercial development. She lecturers in Records Management and Information Rights on the Library and Information Management MSc at Dublin Business School.