Disinformation and Manipulation in Digital Media 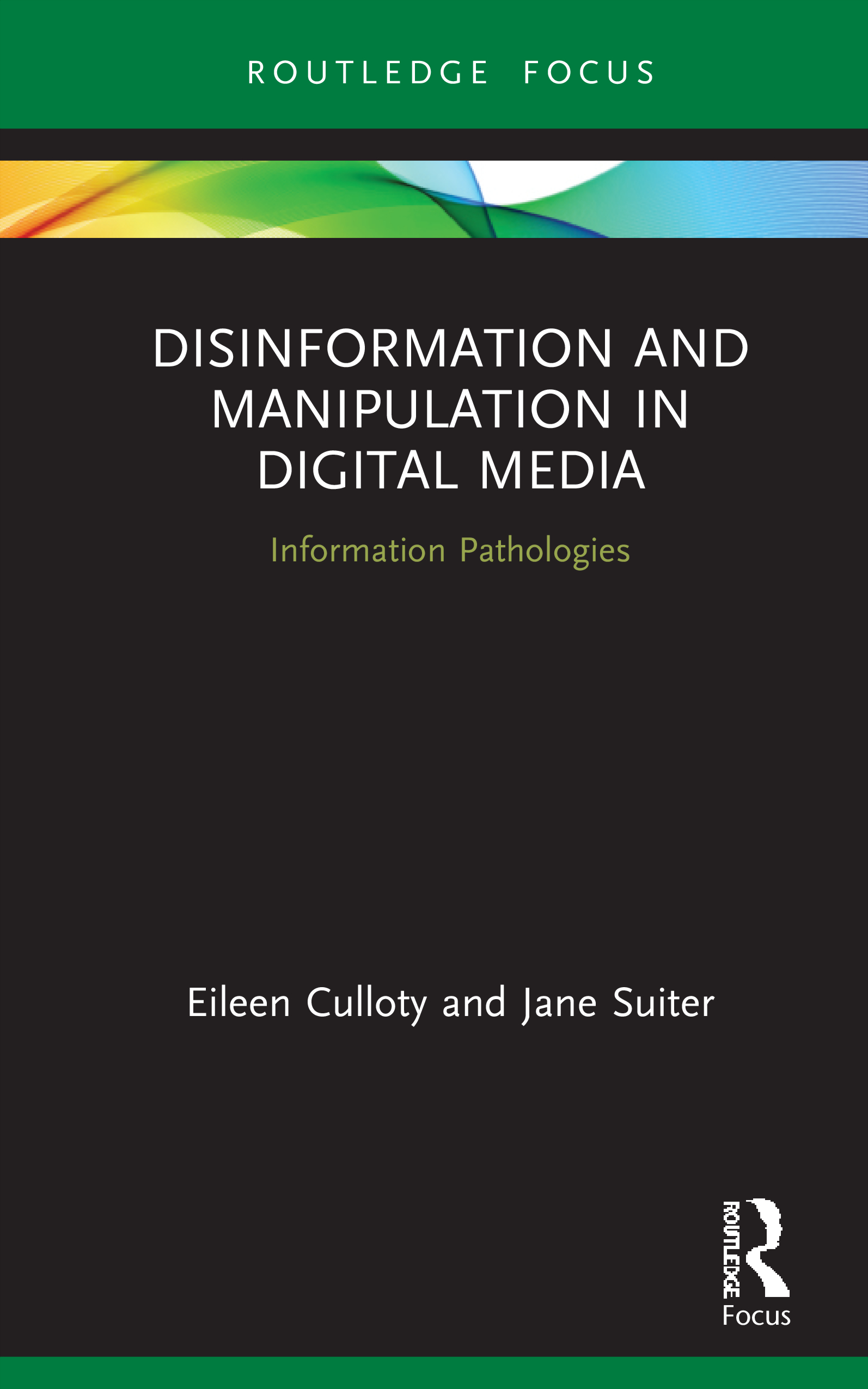 “Across the world, all spheres of life have become subject to false information, conspiracy theories, and propaganda. These information pathologies are implicated in the global resurgence of vaccine preventable diseases, the subversion of national politics, and the amplification of social divisions. In 2018, the United Nations Human Rights Council cited Facebook as a ‘determining’ factor in the ethnic cleansing of Myanmar’s Rohingya population. A year later, the Oxford Internet Institute found evidence of efforts to manipulate public opinion in 70 countries. More recently, the Covid-19 pandemic brought an onslaught of conflicting reports, hoaxes, and conspiracy theories. The World Health Organisation (WHO) called it an ‘infodemic’: an overabundance of accurate and inaccurate claims that left many people confused about what to believe. In this context, it is unsurprising that a sense of crisis has become entrenched among policymakers, scholars, technologists, and others".

The rapid evolution of disinformation

“While the need to develop countermeasures for disinformation is urgent, it is also challenging on many fronts. First, there are significant conceptual difficulties surrounding definitions of the problem. Second, there are practical impediments to developing fair and consistent moderation principles for enormous volumes of online content. Third, any proposed restriction on freedom of expression is necessarily accompanied by legal, ethical, and democratic reservations. Fourth, communication technologies are constantly evolving, which makes it difficult to design countermeasures that will be effective for the future. Fifth, and perhaps most crucially, there are major gaps in our understanding of the problem owing to the nascency of the research area and the lack of access to the platforms’ data. As a result, there is broad agreement that something needs to be done, but there is far less clarity about what that should be.

Undoubtedly, our current digital age is predisposed to a ‘shock of the new’ whereby digital media phenomena can seem more radical than they are because we untether them from their historical precedents. While cognisant of historical continuities, we argue that online disinformation represents a fundamental change. The affordances of digital platforms - with their design features, business models, and content policies - distinguish contemporary disinformation from its historical precursors. Digital media have unprecedented consequences in terms of the scale and speed at which disinformation is dispersed as well as the range of content types and platforms in which it is manifest. While the motivations that lie behind the production and consumption of disinformation may not have changed substantially over time, the rapid evolution of digital platforms have created new opportunities for bad actors while leaving regulators struggling to keep pace".

The ’platformization’ of economic, political, and social life.

“Undoubtedly, our current digital age is predisposed to a ‘shock of the new’ whereby digital media phenomena can seem more radical than they are because we untether them from their historical precedents. While cognisant of historical continuities, we argue that online disinformation represents a fundamental change. The affordances of digital platforms - with their design features, business models, and content policies - distinguish contemporary disinformation from its historical precursors. Digital media have unprecedented consequences in terms of the scale and speed at which disinformation is dispersed as well as the range of content types and platforms in which it is manifest. While the motivations that lie behind the production and consumption of disinformation may not have changed substantially over time, the rapid evolution of digital platforms have created new opportunities for bad actors while leaving regulators struggling to keep pace.

All this is predicated on the wider ‘platformization’ of economic, political, and social life. Entire sectors have become institutionally dependent on the major online platforms. The news media is an important case in point. By dominating how people access information, the platforms became integral to news publishers’ distribution strategies. However, the relationship was fundamentally asymmetrical. News publishers were subject to unpredictable changes in platform policies, such as changes to recommendation algorithms, and were largely unable to monetise the content they created. Meanwhile the platforms, Google and Facebook in particular, came to dominate online advertising; largely thanks to their ability to collect data from users who enjoyed free access to content. As these conditions contributed to a dramatic decline in the news media’s advertising revenue, finding ways to support high-quality journalism is a major consideration within the broader effort to counteract online disinformation".

An overarching context for understanding a multifaceted and evolving problem

“Of course, the challenges faced by journalism are just one contributing factor to the proliferation of online disinformation. The key aim of this book is to provide an overarching context for understanding this multifaceted and evolving problem. In what follows, we present our model of the online disinformation process and its potential mitigation.

Reduced to its basic constituents, online disinformation, when it is successful, is a process that involves different actors and consecutive stages. We model online disinformation in terms of the bad actors who create and push manipulative content, the platforms that enable the distribution and promotion of this content, and the audiences who give it meaning and impact through their willingness to engage with it. Of course, any given scenario of online disinformation is more complex than this basic model suggests and we elucidate this complexity in the succeeding chapters by interrogating each component of the process. Nevertheless, we suggest the value of this model is that it allows us to simultaneously map and assess various countermeasures as efforts to intervene in different stages of the online disinformation process. In so doing, we emphasise the need for a multi-pronged approach and the concluding chapter takes this further to argue that countermeasures are likely to be ineffective unless they are accompanied by broader efforts to address deep-seated issues relating to public trust and democratic legitimacy".

“The first stage in the process involves the so-called bad actors who create and push online disinformation. Bad actors may be defined collectively for their common intention to deceive or manipulate the public, but it is important to recognise that the nature of bad actors is multifarious. To date, much of the scholarly and journalistic attention has focussed on state-backed bad actors in the political domain; primarily on Russia’s Internet Research Agency. As outlined in chapter two, we are also interested in the broader range of bad actors who are intent on misinforming the public or subverting public debate. A nuanced understanding of bad actors is complicated by the fact that much of what we know is derived from leaks and investigative journalism. Moreover, robust investigations - whether academic, journalistic, or parliamentary - have been hampered by a lack of useful data from the platforms.

Nevertheless, we suggest that a broad understanding of bad actors may be determined by assessing: who they are or represent (e.g. states, corporations, social movements); their primary motivations (e.g. political, financial, ideological); and, of course, their tactics (e.g. creating deceptive content, influencing media agendas). The answers to these questions are typically inferred from the digital traces left online by bad actors; that is, by analysing disinformation content and how it has propagated through online networks".

The role of platforms

“This brings us to the second component of our model - the platforms - as the strategies and tactics of bad actors take shape in line with the affordances of digital platforms.

The infrastructures of the platforms facilitate disinformation and incentivise low-quality content in many ways. As noted above, platform advertising models have had a detrimental impact on professional news. They also allow bad actors to monetise their disinformation. In addition, recommendation algorithms appear to have ‘filter bubble effects’ that amplify existing biases and potentially push people towards more extreme positions.

Recommendation algorithms aim to provide users with relevant content by grouping them according to their shared interests. This approach is relatively benign when those interests centre on sports and hobbies, but the implications are severe when those interests are defined by conspiracy theories and hate. More generally, the platforms’ engagement metrics - likes, shares, and followers - incentivise attention-grabbing content including clickbait journalism and hoaxes. These metrics can be manipulated by bad actors who piggyback on trending content and use false accounts and automated bots to inflate the popularity of content".

“Nevertheless, receptive audiences are arguably the most important component of the process. After all, disinformation only becomes a problem when it finds a receptive audience that is willing, for whatever reasons, to believe, endorse or share it. Understanding what makes audiences receptive to disinformation and in what circumstances is therefore crucial. Many researchers are trying to answer this question and what they find is a complex overlap of factors relating to biased reasoning and the triggering of negative emotions such as fear and anger. These tendencies are amplified on social media where our attention is perpetually distracted. Moreover, quite apart from any bias on the part of the individual, repeated exposure to disinformation can increase perceptions of credibility over time. Thus, reducing exposure to disinformation and providing supports to help audiences evaluate content have been to the forefront of efforts to mitigate disinformation".

“There are ongoing debates about how to counteract online disinformation without undermining freedom of expression. Since 2016, a wide range of technological, audience focussed, and legal and regulatory interventions have been proposed. Technological interventions aim to advance the ability to detect and monitor disinformation. For their part, the platforms have variously taken action to reduce the visibility of certain content, but face calls for more radical action to improve transparency and accountability. Within the media and educational sectors, there has been a rapid growth in verification and fact-checking services and a renewed focus on media and information literacy. Legal and regulatory interventions are perhaps the most controversial, ranging from new laws prohibiting the spread of false information to proposals for the regulation of the platforms. Authoritarian states and democratic states that are ‘backsliding’ into authoritarianism are both exploiting concerns about disinformation to silence critics and increase their control over the media. For example, Hungary recently introduced emergency Covid-19 measures that permit prison terms for publicising disinformation. These and similar bills are widely criticised for their potentially chilling impact on freedom of expression and such cases accentuate the need for international leadership to protect fundamental rights and freedoms.

The book adopts an international and multi-disciplinary perspective on online disinformation and its mitigation. As a growing research area, important empirical insights are emerging from multiple disciplines including communication studies, computer science, cognitive science, information psychology, and policy studies. At the same time, technologists and investigative journalists are deepening our understanding of the problem and a range of actors are developing new initiatives and countermeasures. While grounded primarily in communication studies, we draw on developments in all of these areas to provide a comprehensive and up-to-date understanding of the disinformation environment".

“Throughout the book, we use the term online disinformation rather than the more popular term ‘fake news’. The latter is a specific subset of disinformation and the term is already polluted through its invocation as a term of abuse for the news media. Nevertheless, we note that current definitions of the problem are broad, encompassing disinformation, ‘fake news’, manipulation, propaganda, fabrication, and satire. In part, this definitional confusion is a consequence of the variety of forms and genres in which disinformation is manifest. It may appear as news articles, memes or tweets and its substantive content can range from the complete fabrication of facts to their distortion or decontextualization. We take the view that it is not necessarily helpful to think in strict terms of true and false or fake and real. Disinformation is often multi-layered containing a mix of verified, dubious, and false statements. Moreover, in many cases, the distinction between disinformation and ideological opinion may be difficult to define because “political truth is never neutral, objective or absolute” (Coleman 2018: 157). Ultimately, we suggest the threat of disinformation has less to do with individual claims than the cumulative assault on trust and evidence-based deliberation".