There were two Oireachtas sessions. The first featured Professor Mary Aiken, Professor of Forensic Cyberpsychology, University of East London. Her opening statement can be found here.

Thank you to the Committee for inviting Media Literacy Ireland to present its work.

Media Literacy Ireland was established in 2018as an independent, informal alliance of organisations and individuals who are working together on a voluntary basis to promote media literacy in Ireland. Facilitated and supported by the Broadcasting Authority of Ireland, MLI is an unincorporated body with members drawn from many sectors including the media, communications, academia, online platforms, libraries and civil society. We foster discussion, identify gaps in media literacy provision and try to bring stakeholders together to help fill those gaps. There are currently over 240 members.

The overarching objective for MLI is to empower Irish people with the skills and knowledge to make informed choices about the media content and services that they consume, create and disseminate – across all platforms.

At the heart of media literacy is the ability to understand and critically evaluate broadcast, online and other media content and services, in order to best manage media use.

These critical thinking skills are also at the heart of countering disinformation – something which MLI has been actively engaged in since 2019 with the national Be Media Smart campaign. This campaign encourages people to Stop, Think and Check that the information they are getting is accurate and reliable.

The Be Media Smart campaign was delivered across TV, radio, online and the press supported by free air-time, editorial, online ad-credit, social media activity and events from a very wide range of MLI members. RTÉ, TG4, and Webwise made particularly significant contributions in the development stage while additional key strategic contributions were made by Virgin Media, Sky Ireland, Learning Waves and the commercial radio sector, the community media sector, Newsbrands Ireland, the Library Association of Ireland and the online platforms.

All the Be Media Smart communication directed people to www.bemediasmart.ie for help and support, including advice on how to talk to friends and family who may be affected by misinformation or conspiracy theories.

This initiative clearly demonstrated the power of collaboration when MLI members play to their own strengths. At the peak of the campaign, we estimated that about 2 million people encountered the Stop, Think Check message and research carried out by Ipsos MRBI in June 2020 indicated that 27% of adults recalled the campaign, unprompted. For context, 13% – 17% is considered very good recall for similar campaigns. The initiative has been noted as best practice and the concept has been adopted in six other European countries.

While the work of MLI helps to counter disinformation, it is not the only focus.

MLI understands media literacy as an umbrella term encompassing a range of related literacies required to function effectively, safely and ethically in a world where digital communication is an integral part of daily life. We regard this as a lifelong learning process.

MLI uses the media literacy framework set out in the BAI’s Media Literacy policyto help people develop the skills and knowledge to understand and critically evaluate media; to access and use media; and to create and participate via media in a responsible, ethical and effective manner in the creative, cultural and democratic aspects of society.

MLI acts as an enabler for media literacy stakeholders in Ireland. Our work is focussed on four key work strands: Coordination, Communication, Innovation and Promotion. We would be happy to elaborate further on our activities in these areas.

Finally, it is also important to note that while media literacy increases resilience to many of the issues that are associated with digital communications, it should not be seen as solution on its own.

People form beliefs for complex reasons and skills and knowledge alone may not be enough to guarantee informed decision-making. However, the critical awareness fostered by initiatives such as Be Media Smart and the embedding of the message to STOP, THINK and CHECK when we consume media is, we believe, a valuable contribution to the empowerment of citizens and enables them to be better able to judge the accuracy and reliability of information. 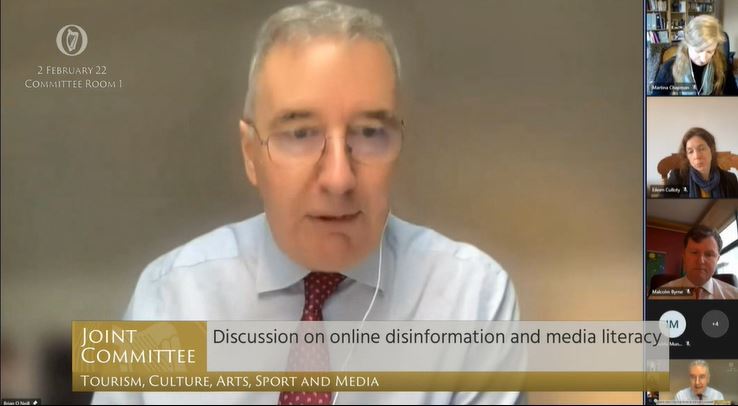