By Stanislav Matějka, European Affairs Coordinator, The Office of the Slovak Council for Broadcasting and Retransmission.

On the 16 June 2022, the European Commission presented a new strengthened Code of Practice on Disinformation, its flagship project to fight the spread of harmful disinformation online.

The Code comes after months of negotiations and was prepared in cooperation with its signatories during two crises that highlighted the need for a strong and effective instrument: pandemic related to COVID-19 and the Russian invasion of Ukraine. The two crises have influenced both the process of preparations as well as contents of the Code.

The Code is a second iteration of the self-regulatory instrument that was initially introduced in 2018. The signatories were periodically publishing transparency reports on their general policies and concrete steps to address the spread and monetisation of disinformation in the online sphere. Monitoring of the first code showed that much more clarity is needed in terms of specific commitments and how these could be assessed independently and effectively also on a country level.

A strong monitoring framework, a clear set of measurable key performance indicators and access to data for research will be key to the success of this new code. The Code establishes a Permanent Task Force with the mission to adapt and evolve the Code further.

Apart from the Commission and the Signatories, the Permanent Task-Force members include the European Regulators Group for Audiovisual Media Services (ERGA), European External Action Services (EEAS) and European Digital Media Observatory (EDMO). In addition to that, the new Code was signed also by a larger and more diverse set of signatories including research organisations and fact-checkers.

The new Code contains commitments to:

“Disinformation is a form of invasion of our digital space, with tangible impact on our daily lives. Online platforms need to act much strongly, especially on the issue of funding. Spreading disinformation should not bring a single euro to anyone. To be credible, the new Code of Practice will be backed up by the DSA – including for heavy dissuasive sanctions. Very large platforms that repeatedly break the Code and do not carry out risk mitigation measures properly risk fines of up to 6% of their global turnover.”

The new Code is a piece of a larger puzzle of the EU toolbox that aims to curb the spread of manipulative narratives harmful to the public interest including democratic processes or public health. Under the Digital Services Act very large online platforms, such as Facebook, Twitter or Google to name a few, will have to assess if and how their products are being misused by bad actors, including those who use manipulative techniques and tactics to spread disinformation. DSA as well as the Code itself include a crisis response mechanism that should enable the EU, together with the platforms themselves to act swiftly in times of crisis, such as war or pandemic, and limit or minimize the risks associated with their services.

The expectations from the Code are high and the work is just beginning. The signatories have committed themselves to delivering the first set of reports about their compliance with the commitments within six months from the signing.

The Permanent Task Force, as well as the monitoring framework, will have a crucial role in ensuring all the commitments are fulfilled and that the effects of the code are felt across all the EU Member States. 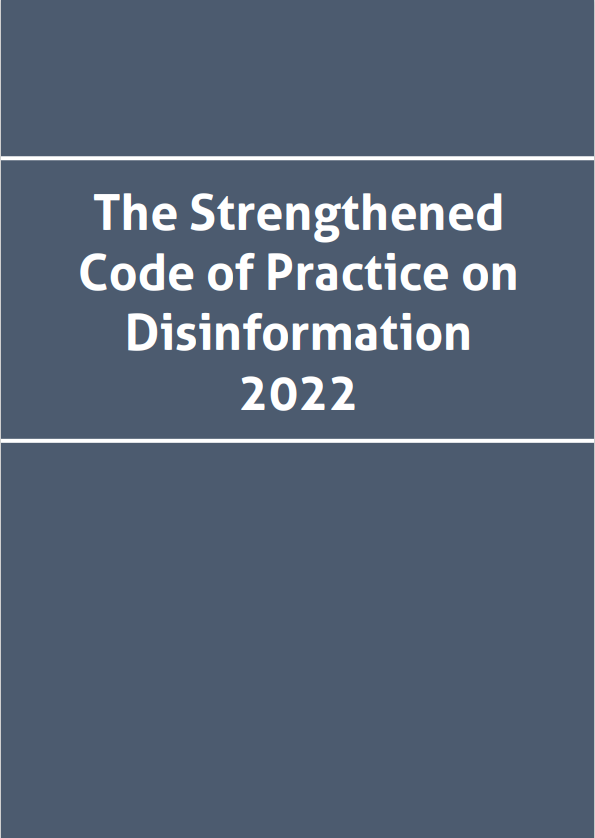