Look Back: ‘Media Literacy Monday: Who’s influencing who? A look at social media influencing in Ireland’ 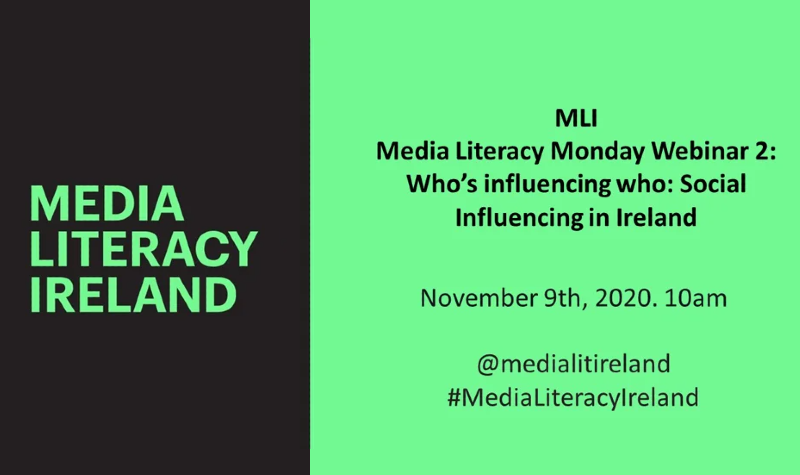 On Monday 9 November at 10am, the second webinar in the MLI ‘Media Literacy Monday’ series took place and we were delighted to have a broad range of speakers covering many different aspects of social media influencing in Ireland. The full webinar is now available to watch here or if you prefer you can listen here.

Following an introduction from Joe Hoban, Head of Communications & Corporate Engagement in RTÉ and RTÉ representative on the MLI Steering Group, we were delighted to welcome back Christine Bohan, Deputy Editor of TheJournal.ie back to the MLI stage, this time as moderator.

In October 2020, Christine contributed to the very popular MLI webinar looking at communicating scientific data in a health crisis and if you would like to hear Christine’s contribution to that discussion you can listen back here.

Recently the conversation about the ethics of influencing has been receiving attention and this point was discussed in some detail by Lorraine Harton. Lorraine is a filmmaker, producer and media tutor and currently coordinates the Social Media Influencer course in Colaiste Dhulaigh College of Further Education. You can watch Lorraine’s contribution here.

Orla Twomey, Chief Executive of the Advertising Standards Authority for Ireland illustrated how the advertising code applies to bloggers/influencers and took us through the guidelines around the commercial aspects of social media influencing. You can watch Orla’s contribution here.

Dr. Tanya Lokot, Assistant Professor in Digital Media & Society in the School of Communications, DCU, has been researching activism, protest, internet governance, and freedom online for over a decade. You can watch her discuss the challenges and opportunities around social media activism here.

We also had presentations from Fardus Sultan, a PhD researcher, an Associate Lecturer in marketing and cyberpsychology, and a Director of FarendNet, which considered children’s media literacy in the context of social media influencers. You can watch Fardus here.

Continuing with a focus on children and young people, Catriona Mulcahy, Digital Content Officer in Webwise presented the new ‘Full Picture’ campaign by Webwise which highlights the influences and pressures young people face online and encourages them to see the full picture. You can watch Catriona’s contribution here and see the Full Picture video and campaign materials on the Webwise site.

Jane McGarrigle, Project Officer with Webwise, joined the panel for the debate which was followed by conclusions and recommendations from freelance journalist and librarian Isabelle Courtney before Joe Hoban closed the proceedings – all of which you can watch here.

Our sincere thanks to everyone who participated in this webinar and helped to get the conversation started about the role of MLI in promoting media literacy in the context of social media influencing.